Brian Kalu, who arrived at the Cleveland Hopkins International Airport after traveling to California, says he is comfortable with masks now being optional on flights. [Lisa Ryan / Ideastream Public Media] Northeast Ohio residents who are planning to travel by plane, rideshare service or local mass transit can now ditch their masks.

The mask mandate is no longer being enforced at the Cleveland Hopkins International Airport, as well as the Akron Metro RTA and on Cuyahoga Valley Scenic Railroad trains.

The long-time mask mandate on flights was lifted by most airlines Monday after a U.S. district judge struck down the federal requirement. Other transportation agencies followed suit, including national rideshare company Uber.

This was welcome news for some passengers at Hopkins Airport Tuesday, while others were hesitant to drop their face coverings just yet.

“I would rather (the mask mandate) stay, personally, a little bit longer,” said Beth Spyke, who was flying out of the Cleveland airport on Tuesday. She’s flying to Chicago on Southwest Airlines, which is one of the airlines making masks optional. She still plans to wear her mask inside the airport and on her flight.

“I have enough family members who have some chronic conditions, so I just as soon, at least a little bit longer, to keep the masks on,” she said.

Another passenger, 72-year-old Nic Zerebny, said he will continue to wear a mask. Zerebny, who was about to fly to Chicago, expressed concern that those around could be sick or carrying the virus.

Other passengers are more comfortable with masks becoming optional, like Brian Kalu, who had just arrived in Cleveland from his vacation in California.

“I think it’s fine because COVID’s starting to slow down, I think people should probably still be wearing masks just to be safe, but people can do what they choose,” Kalu said. 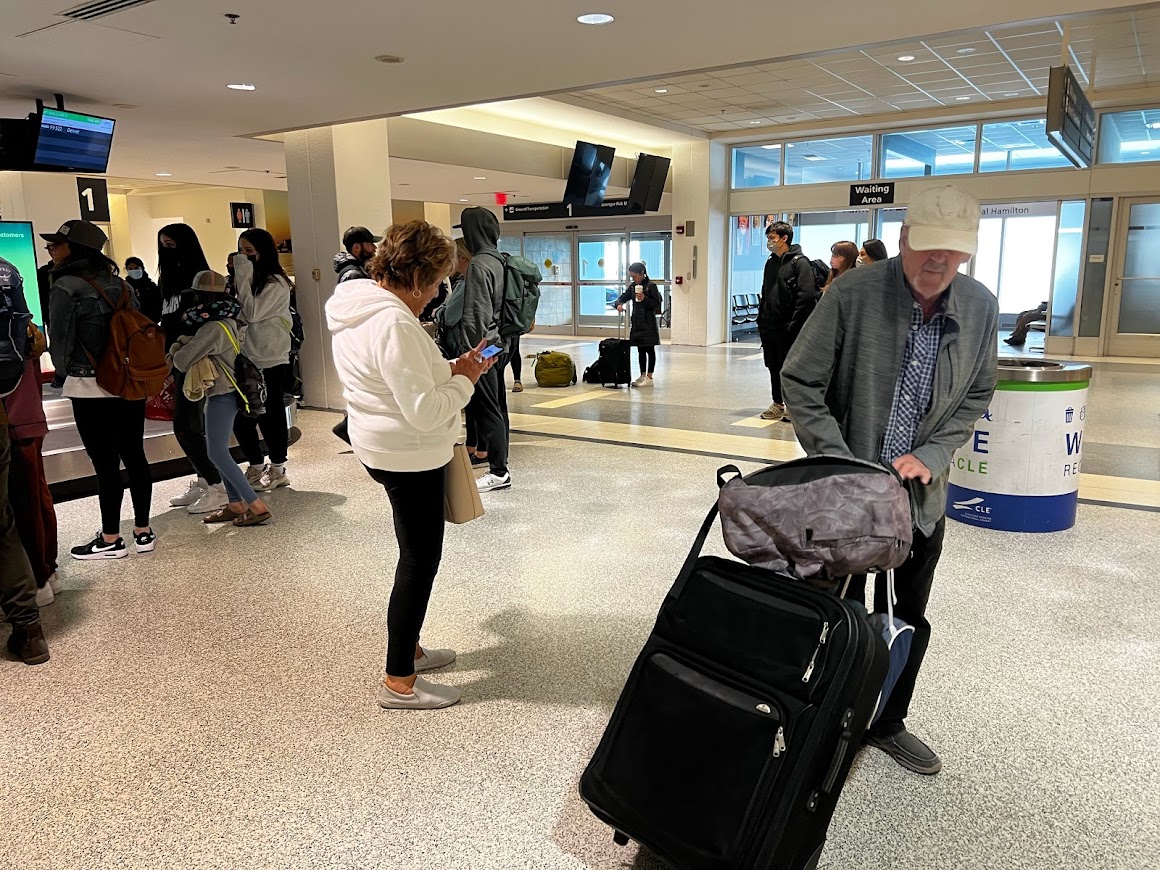 Cleveland Hopkins officials confirmed on Twitter that the mask mandate is no longer in place in the building.

"However, your airline may still require you to wear a mask. Please check with your airline prior to departure," airport officials said in the tweet.

Before the federal judge's ruling, the public transportation mask mandate, which began in January 2021, was set to expire Monday. However, the Centers for Disease Control and Prevention recently extended it through May 3 amid an uptick in COVID-19 cases across the U.S.

After a judge in Florida struck down the mandate Monday, the federal Transportation Security Administration (TSA) no longer had to enforce the mandate on public transit and transportation hubs like airports, leading some companies, including American Airlines, Delta Airlines and United Airlines, to forgo the requirement on their flights.

Most airlines had already imposed their own mask requirements in May 2020, before the CDC's official mandate.

The change comes as COVID-19 cases are rising in parts of the U.S., including in Ohio, driven by BA.2, a highly contagious subvariant of omicron. Last week, the state reported 4,808 new cases, eclipsing 4,000 for the first time in several weeks.

Dr. Keith Armitage, an infectious disease physician at University Hospitals (UH), said the CDC was likely going to end the mandate on May 3, but wanted to be cautious in case BA.2 causes a concerning spike in cases across the U.S.

Some airlines dropped the mandate for domestic flights but will still require masks on international flights depending on the mask requirements of the country being flown into.

Armitage recommends high-risk individuals, including people who have not received the COVID-19 vaccine or who have underlying health conditions, still wear a mask on flights. For everyone else, he said the risk of contracting COVID-19 is highest before and after takeoff, rather than when they are actually in the air.

“There’s very sufficient air circulation and filtration, and the risk of airborne diseases goes way down. The risk is really getting on and off the plane and at the airport being in line,” Armitage said.

Armitage added that people should respect others’ decisions on whether to mask up.

Riders and drivers no longer have to wear masks on Uber rides, the company announced Monday. In most cases, there is a low risk of COVID-19 transmission in a short car ride with few people, Armitage at UH said.

Other public transit agencies have also dropped mask mandates. The Akron METRO, the public transportation service for Akron and surrounding Summit County, announced Tuesday it will no longer require face coverings on buses or at stations, but noted in a statement that the CDC continues to recommend masks in public transit settings.

METRO is also working with the Summit County health department to ensure safety measures are followed, according to the release.

The Greater Cleveland Regional Transit Authority announced late Tuesday that the mask mandate for employees and riders has been suspended.

"However, GCRTA recommends wearing face masks while waiting for and riding our buses, trains, and Paratransit vehicles," according to the release.

The Cuyahoga Valley Scenic Railroad, a passenger rail service that runs through the Cuyahoga Valley National Park on the weekends, is also doing away with masks on the train and at boarding stations, according to a statement released today.

“This Friday’s Cleveland Dinner & Event Train will be the first excursion in more than a year to run with no mask requirements,” officials said in the statement.