Ohio will spend millions of dollars to create or expand health care clinics inside schools, including some in Northeast Ohio, Gov. Mike DeWine announced Friday.

Thirteen school districts across Cleveland, Akron and Canton will be home to new or expanded health centers that will provide care to students during the school day, DeWine’s office said in the release. Many of the schools are in urban or rural areas where students may struggle with health care access.

“Studies have shown that health and wellness are interconnected,” Gov. DeWine said in the release. “A student who is not healthy or who is chronically absent is not able to achieve their full potential. These partnerships between healthcare providers and schools supports the whole child and ensures that every child may realize their full potential.”

The Ohio Department of Health is awarding 15 contracts, totaling more than $25.9 million, to create 29 new school-based health centers and expand services in 107 existing clinics, according to the release.

Akron Children’s Hospital is among four Northeast Ohio medical providers receiving new funds. About $3.9 million will be used to expand clinics in Akron Public Schools as well as four rural districts where access to health care is a challenge, said Michele Wilmoth, director of school health services at the hospital system.

“They’re having access to care barriers. Whether that’s in that area there aren’t a lot of providers or if there’s transportation issues, the kids are less supported in terms of resources around health care from those communities,” Wilmoth said.

The money will be used to purchase new telehealth equipment and hire more staff to better reach students in these underserved districts, she added.

In addition to regular school nurse services, the school health clinics will offer well-child checkups and immunizations, as well as some behavioral and mental health services, Wilmoth said.

“This money puts us five years ahead. You know, this [was] our strategy all along, to increase services and increase staff around this work. The funding has really accelerated what we’re able to do in such a short time frame,” Wilmoth said.

Some of the expanded clinics across the state will add vision, dental and other services, including behavioral health, the release said.

The goal of the health centers is to relieve some of the obstacles students face in accessing health care, such as not having a primary care provider or proper transportation to get there, according to the state’s release.

They can also ease the burden of students having to miss school to go to the doctor – and parents missing work to take them, the release states.

“Academics and health care are pretty aligned. Children need to be healthy in order to reach their academic potential. If children are hungry or not feeling well, they’re not going to be able to learn,” Wilmoth at Akron Children’s added. “We really partner with schools in the mission to serve children and give children every opportunity they can have, so it just makes sense to bring that care and work with schools.”

MetroHealth was awarded more than $4.4 million for health clinics in the Cleveland Metropolitan and Cleveland Heights-University Heights school districts. Northeast Ohio Neighborhood Health Services (NEON) will receive more than $586,000 for a clinic in Euclid City schools, according to the release.

The newly announced funding was made available through the American Rescue Plan Act of 2021, as well as through the Governor’s Emergency Education Relief fund, according to the release.

More details about the other schools and medical providers being awarded funds can be found in the chart below. 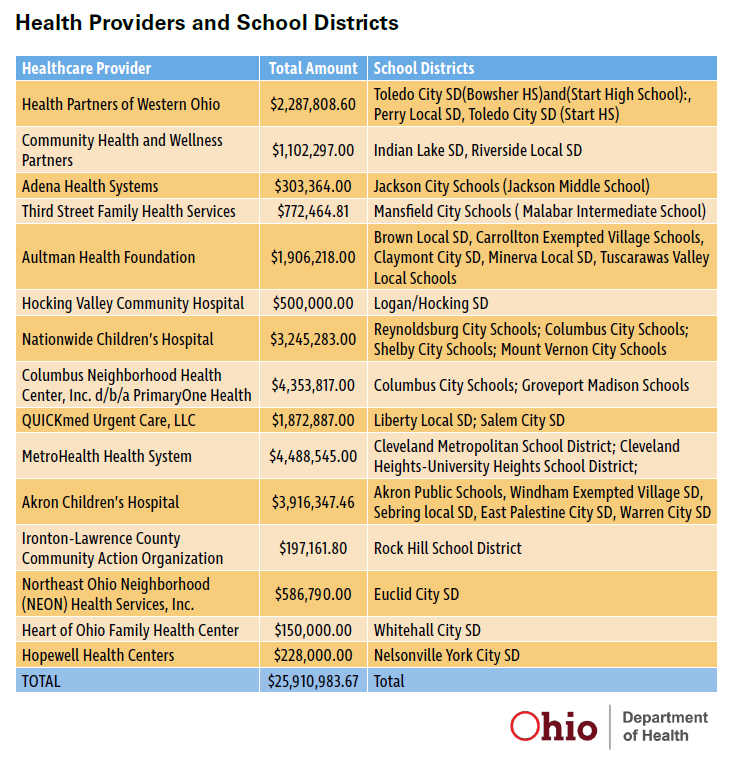 Kids Returning To School After Isolation With Mental...

Cleveland’s gay bars fought to survive the pandemic. Will...